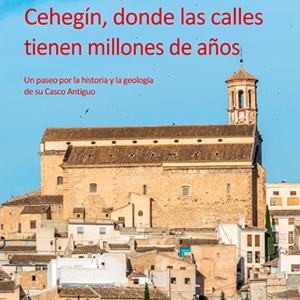 Cehegín, where the streets are millions of years old

In 1623, after an altercation in an act of honor, Martín de Ambel fled from justice and took refuge in the church of the Immaculate Conception of Cehegín. In it he was confined for thirty-eight years in which he dedicated himself to observing the life of its people and made a detailed description of the history of Cehegín since its foundation. Ambel began his work by writing “…Cehegín, an ancient town of the kingdom of Murcia….is a population of Greeks” (a frankly debatable idea although very evocative). In addition, he described aspects related to customs and geography, many of the places he cites being recognizable today. He even makes geological comments such as the reference to the lodestone.

We, in this walk through the Old Town, want to walk its streets as Martín de Ambel did, but we will do it from a geological and historical perspective. We will make stops at unique buildings, referring to their characteristics, the historical context in which they were built and the people who built or inhabited them. We will try to relate the rocks of its facades with the geological outcrops from which they were extracted, as well as with the moment in the history of the Earth in which they were formed, showing their paleogeographic and environmental context. In short, we will unite geology with history.

We are aware that in this guide not all the emblematic buildings or all the lithologies of Cehegín appear. It does not pretend to be a manual of history (human and geological). That's not the objective. A tour that went through all the unique buildings would take too long. We chose this one because it allows us to relive the fundamental moments in the history of Cehegín walking the streets of its beautiful Old Town. Regarding lithology, this guide only comments on rocks that have been recognized by sight and whose provenance has been established with some certainty. Those in which doubts about the location in geological time are raised have not been included. It would be interesting to carry out a more in-depth geological study at a chemical, mineralogical, textural and paleontological level that would make it possible to correlate, without any doubt, all the lithologies with their outcrops, although this is also beyond the scope of this work.

In any case, we will follow the famous peripatetic method of Aristotle, (another Greek like the cehegineros could be!) who, walking through the garden of the temple dedicated to Apollo Licinius, taught his students. Also walking, we will try to learn history and geology using the streets as a classroom and the buildings as a book.